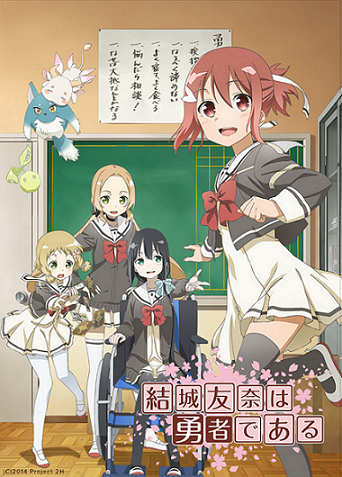 Yeah it’s three years old. Yeah I’m a little late to this party. Don’t care. It showed up on Netflix so I watched it. Don’t make my mistake.

Yuna is a show that I would encourage all aspiring anime writers to watch. Not because it does anything correctly, but because if this mash-up of every other anime you’ve seen in this genre can get picked up, drawn and aired yours can as well.

You’ve probably seen this show, even if you’ve never watched it. It’s a lame attempt to cash in on a lull in the Madoka franchise. The story is uninteresting, the “mystery” portions are easily fit together, and all of the magical mechanics and cool visual scenes you’ve seen done elsewhere, only better. The magical costuming portions were ripped directly from the Nanoha series. The only thing missing was the words “Set Up”. The big honking magic weapons are straight out of the Mai Hime franchise.

I’m already bored of writing about this run of the mill piece of easily forgettable filler. It’s filler in the sense that if you are longing for a magical girls story, this will fill the void. The characters are OK, the story is OK but disappointing, but the animation is really good.

If you’ve read this entire thing, then you’ve spent more time on Yukli Yuna than I would recommend. Go watch something else.