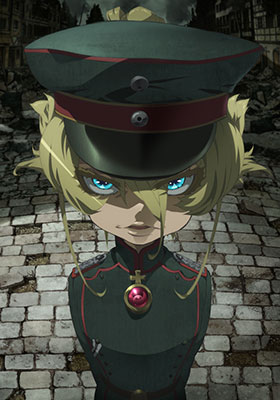 Try to explain the plot of Youjo Senki to a non-anime watcher. It’s nearly impossible without sounding like a raving maniac. The premise of the show should never work, and yet it does. It works. It works well. It’s my favorite series of the season by a long shot and I can’t say I really know why.

The powers that be are upset with their dwindling belief base so they take it out on a ruthless Japanese salaryman in order to get him to repent his heathen ways.  They whip up a vague recreation of Nazi Europe and plop the guy right in the middle of it as an orphaned baby girl with the expectation that he’ll repent and start singing praises to the powers that be.  Not much goes according to their wishes and the stakes get raised again and again.

It’s not as if the Isekai genre is anything new.  Variants on the theme have been around since at least the late 1800s.  However, this may be the first one I’ve personally come across where the basis of the other world is rooted firmly in the actions of the first.  Without the base of why Tanya is what she is, if she had no prior memories, and the first world, the series would lose far more than it gains by the constant push and pull of Tanya vs Being-X.

There’s no fluff to be found in Youjo Senki.  Studio NUT came out of the gates swinging and there’s no room for it in this tale.   I suppose the most impressive thing about the series is how it all weaves in and out seamlessly.  I didn’t experience any jarring scenes where you were forced to remember some obscure character from a background cast of dozens.  The background characters were sparse and memorable for however long they remained alive.

I can’t find a lot of other anime that I’ve watched to compare Youjo Senki to.  At first I thought we were going to see something along the lines of Subaru from Re:zero where we’d learn new things every time Tanya dies.  Instead we have the opposite: live by any means necessary because this is it.  You can draw a few parallels to last year’s Drifters, but the parallels are few and far between.  You’ve got a touch of Code:Geass going on, but again only the roughest of parallels can be drawn there.  I found it refreshing that I couldn’t spot any scenes or storylines that could have been interchanged from other anime like I do in a lot of other anime. No fanservice (yay) and no compromise on the story made this my favorite anime of the season by far.